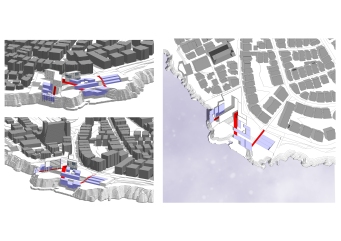 According to my analysis of the visit of Antalya, I have realized that the organization of the streets in Kaleiçi district are very narrow and dense.  However, the rest is getting less dense compared to Kaleiçi district. As a result of this, in Kaleiçi, the people are creating a some kind of a sub-culture that they are intended to prefer the liminal spaces rather than more defined spaces to spend their time. Liminal spaces are the spaces that determined by the users’ intuitive acceptance. However, going out from the Kaleiçi it is getting loose. In this point, Karaalioğlu parkı is acting like a threshold in between the old and the new city. It is one of the most important project of its own era. The project is designed to create a relation between sea and the city. for this, they designed it with 3 axial structure ending with miradors.

So that, I tought our site can work as threshold in between liminal spaces and more defined spaces. I defined 3 axes in our site and these axes are ending with miradors. And the liminals spaces that are designed by me is located near these axes.

About Dismantling Talya Hotel, I defined the the core of Talya as a node point which is problematic for me. So that I have removed that core. The smaller wing that I have got after dismantling Talya is working as a liminal space by designing it with porosity idea. To get the porosity, I have extruded certain masses from Talya by taking reference from the balconies. Because for me the balconies are also liminal spaces that are intened to be individual. 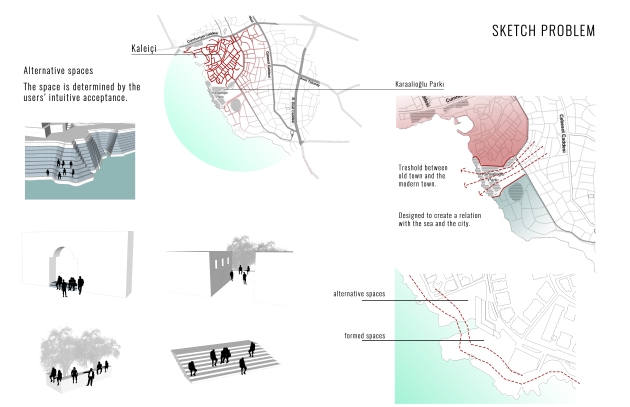 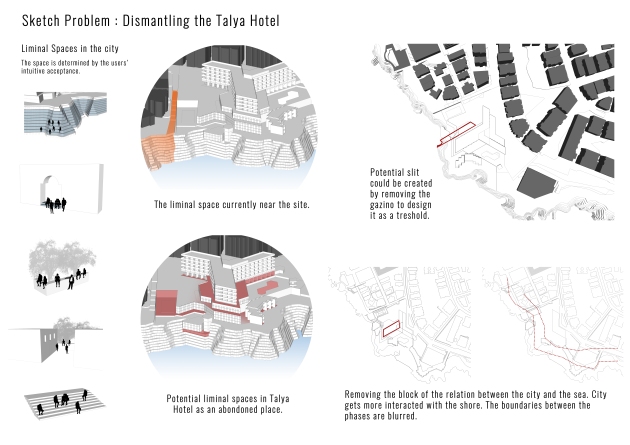 Our architectural project of 402 site is located in Antalya district, where formerly Talya Hotel was serving actively. It is the earliest 5 stars hotel in Antalya. The hotel was playing a huge role in the urban sense. However, currently the hotel is out of use. 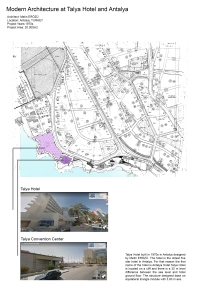 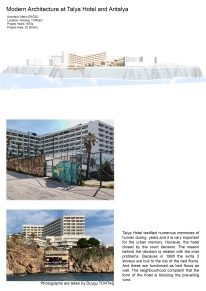 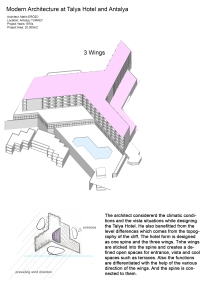 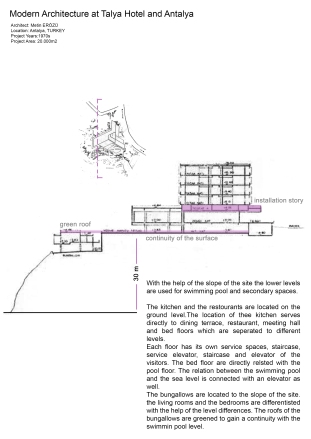 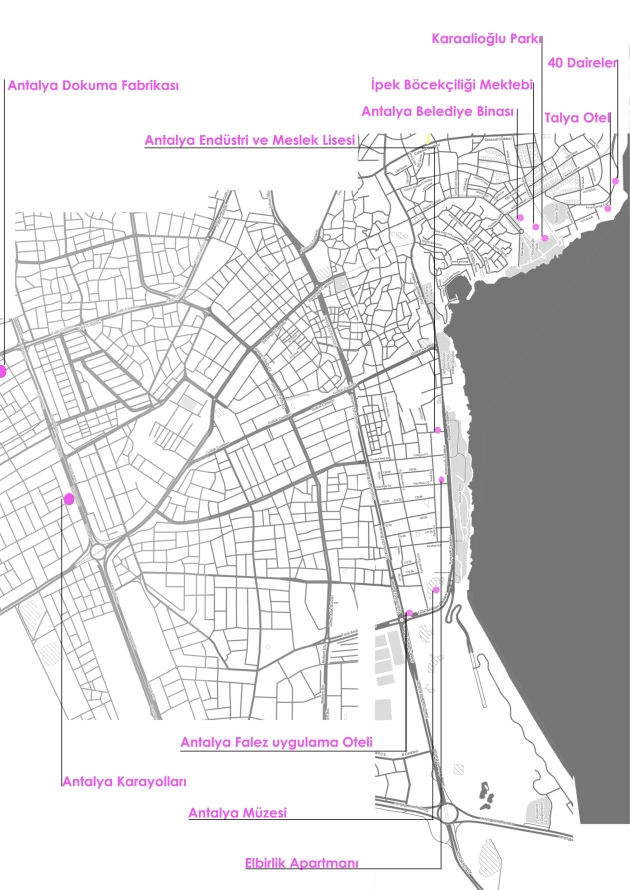 The apartment is built by the unknown architects in 1964 as the first apartment block in Antalya. The block is playing a huge role in the transition period from the single family housing to the multi-story communal lifestyle. The block has 5 floors and each of them has 8 parts. That’s why it’s called 40 Daireler.

The flats in the north and south façade has balcony that are following through the three façade. These balconies provides an open space for the habitants in the changing location of the sun conditions. The sun breakers and the wind barriers that are used in the block provides a climate control especially in the southern façade that are facing the sea.

Each floor has rubbish chute that helps to throw away the domestic waste. The West façade has hexagonal gaps that serves as sun breakers also carries its period’s ornamental façade style.

The shaded space created by the pillars on the ground floor and the terrace facing the sea provides a socializing space to gather people together who are coming from the single family house to the communal apartment life. However, the space on the ground floor is currently using as storage area and the terrace is known used for the spaces to put the solar energy machines.

Also the habitants are now extending their living rooms by getting the balcony in and replacing new kinds of windows and the railings. Because of these, the original design of the façade is now destroyed.

In 1928 it is established for to spread the silk culture (ipekböcekçiliği) in Antalya. It is built in the south of the garden of the Antalya Municipality. In recent history, the silk culture in Antalya became one of the source of income. Because of these, the school is established to train people in silk culture. After the long years of its service, it is function is replaced as the Belediye ve Çevre İmar Müdürlüğü. Currently it is functioning as Fen İşleri.

It is located in Karaalioğlu Parkı which is one of the biggest urban planning project of erken cumhuriyet period. Also the Antalya Büyükşehir Belediyesi building is located near this building which is also one of the examples of erken cumhuriyet period. The park is situated in the periphery of the old and the modern city center and creates a relation between sea and the city.

It is built by Antalya “Mutasarrıfı Sabur Sami Paşa” in 1915-1916. It is firstly built as 3 storey height. He built it y the help of the army (amele taburu inşaat askerleri). It is also called as Ittihat ve Terakki Mektebi. After the First World War, the Italians are conquered the whole school and used it as their own military kışla. And after 2 years they got the school back. Initially it was only giving education to male students. However after 10 years they started to give education to female students as well. In 1988 after a big fire the roof burnt and they made a restoration and it is used as Hükümet Konağı.

The school is protected by Tabiat ve Kültür Varlıkları Koruma Kurulu in 1997. Because it is one of the good architectural example of erken cumhuriyet period. After 1980 its garden is destroyed because of the fast urbanization. After the restoration the building is used as Valilik building. Even though they tried to protect the original façade, the inner organization of the building is ruined.

It is also known as the Antalya Erkek Sanat Enstitüsü. It is consisted of 4 blocks. The first block is built in 1946 and it includes classes and studios. The three of the blocks are covered under the same saddle roof. The block which has metal technology studios has opening on the roof to receive the light in. The windows of the studios are designed rectangular, vertical and tight. With this way the studios could receive the natural day light. The block which is built in 1965 is consisted of library, office and classes.  It is a reinforced concrete building. They designed certain cantilevers on the south façade which are functioning as shadings. Also with this way the entrance is more strongly defined. Over the square windows, the long strip of window is located to receive more light.

It is one of the good example of Cumhuriyet period schools due to its spatial organization. The windows are formed and shaped according to the solar conditions, the shadings on the south façade shows that the building is designed according to the function and the site forces. Because of this, the building could still sustain its function. It is established as a big project of education after the Cumhuriyet and it is also aimed to train people for jobs. It is also known as one of the first educational institute of the Antalya. It is known that like the Köy Enstitüleri, in the school the students could work. The students are worked in the construction of the buildings as well. That’s why it carries a great importance for the Antalya society. 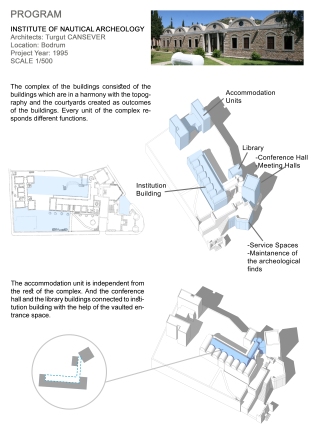 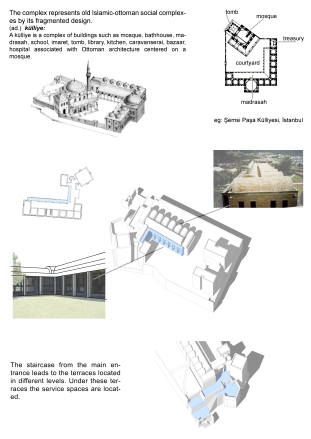 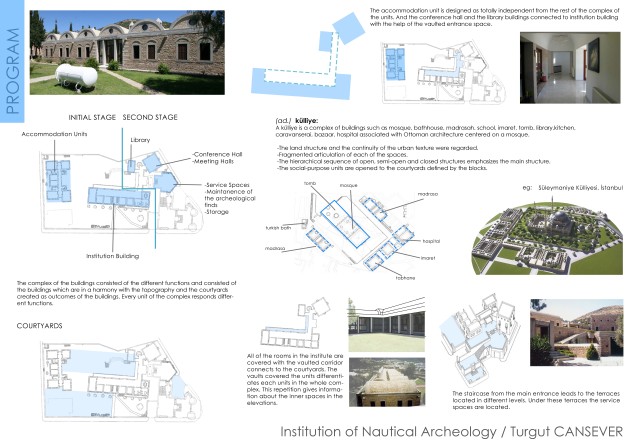 The institute of nautical archeology is established in USA and carry on the studies in various countries. The corporate office of the institute is existed in Bodrum.

Every unit of the complex responds different functions. The accommodation unit is designed as totally independent from the rest of the complex of the units. And the conference hall and the library buildings connected to institution building with the help of the vaulted entrance space. Also the complex represents and carries the references of the old Islamic-ottoman social complexes (külliye).

The complex represents old Islamic-ottoman social complexes by its fragmented design. It is clearly visible in the plan that the fragmented articulation of the office buildings, studios, maintaining service spaces, library and the meeting halls is referencing the külliye planning.

All of the rooms in the institute are covered with the vaulted corridor connects to the courtyards. The vaults covered the units differentiates each units in the whole complex. This is also coming from the külliye idea. This repetition gives information about the inner spaces in the elevations and also creates ornamentation to the complex. Also the fragmented articulation helps to create a harmony with the topography.

The approach to the complex is from different topographic levels and different directions. The group of buildings located in the middle of the garden are integrated to its surroundings. There are openings in almost every elevation of the whole design.

“The openings towards the sky of all of the volumes creates an idea of infinite spaces.” -Turgut CANSEVER

With this way, while the articulation is horizontal, the vertical opening creates a spread opportunity in every direction.

The staircase from the main entrance leads to the terraces located in different levels. Under these terraces the service spaces are located. The accommodation units are formed as two symmetrical blocks and there is a one story height connection space consisted of common spaces.

The complex of the INA formed according to the site forces and the cultural values. Also it can be seen in the complex as well the thing that Cansever claims about the architecture. The critical regionalism idea that he supports is visible in the whole project: settling to the site without any intervention to the topography, orienting through according to the climatic conditions, morphology and the organization of the architectural elements, language of tectonics of each units, the references belongs to the former architectures and the references to the culture.